The Company also announced that Ascent Solar’s common stock is expected to commence trading on Nasdaq at the opening of the market on Wednesday, August 24, 2022 under the Company’s current ticker symbol “ASTI.” There is no Shareholder action necessary as a result of the Nasdaq up-listing.

The Company’s common stock will continue to trade on the OTC market under the symbol “ASTI” until trading on Nasdaq commences.

Dr. Amit Kumar, Chairman of the Board of Directors, said, “This is a major milestone for the Company after being dormant for most of 2020.  We are pleased to emerge from dormancy, and look forward to a bright future for Ascent.”

“I am excited about this critical step,” said Mr. Victor Lee, President and CEO of Ascent Solar Technologies, Inc. “The vote of confidence from investors and the uplisting to Nasdaq are important in completing the Company’s turnaround and will enable broader market participation. I look forward to delivering further progress to our stakeholders,” continued Mr. Lee.

Ascent Solar Technologies, Inc. is a developer of thin-film photovoltaic modules using flexible substrate materials that are more versatile and rugged than traditional solar panels.  Ascent Solar modules were named as one of the top 100 technologies by R&D Magazine, and one of TIME Magazine's 50 best inventions. The technology described above represents the cutting edge of flexible power and can be directly integrated into consumer products and off-grid applications, as well as other aerospace applications. Ascent Solar is headquartered in Thornton, Colorado, and more information can be found at www.AscentSolar.com. 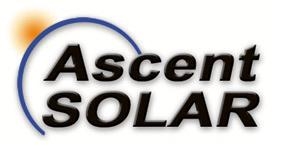