Baristas spots have always shown a positive ROI when airing spots within sports programming, and this season’s opener is a great place to begin the renewed commitment to sales of White Coffee while further establishing brand awareness as we begin the roil out into the new functional beverage line. 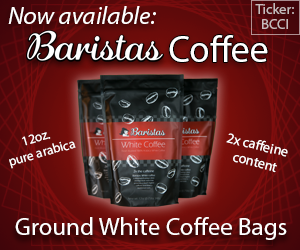 The “Kick It” spot featuring Megs McLean, the founder of the “Crunge” music genre (a combination of Country, Rock, and Grunge), has been a proven success and exemplifies a movement of stars and companies who support the NFL as well as our country, its civilians, and our military. The spot will be seen nationally by all viewing households of the 13 million subscribers of the Dish Network satellite system

Baristas Coffee has begun a multi-tiered media push to propel consumer and market awareness ahead of the confirmed October roll out of the first of its recently announced new functional beverage products and distribution channels.

Baristas continues to leverage the success it has enjoyed with its Baristas White Coffee products (Now an Amazon Prime’s Choice coffee product) https://www.amazon.com/Baristas-White-Coffee-Single-Arabica/dp/B018VYS7YW/ref=sr_1_1_a_it?ie=UTF8&qid=1536541548&sr=8-1&keywords=baristas+white+coffee that built the foundation for market awareness and infrastructure development to what will now become a multi-product expansion into the fastest growing sector of the beverage industry.

The infused product line is based on coffee, the world’s most popular beverage. It offers consumers the ability to enhance their daily coffee consumption with vitamins, minerals, nutraceuticals, and other additives legal in the states which the products are being distributed in. With U.S. coffee consumption at over 83% of adults and increasing annually, the ability for the consumer to impact their vitamin consumption, heart, brain and digestive health in brewed and Ready to Drink selections is estimated to drive significant revenues to the Baristas sales channel.

Barry Henthorn, CEO, stated: “We are thrilled to be able to take advantage of the incredible bargains available during the coverage of live NFL games that are a result of the actions of major advertisers and the disdain for the behavior of a few individuals. Aside from last season and now the uncertainty surrounding the respect for our country and our flag so far this season, there have never been opportunities for such dramatic discounts allowing us to reach one of the largest markets in all of television.”

About Megs McLean: Megs McLean is a full-time professional singer/songwriter and performer who has opened for Clint Black, Sara Evans, David Lee Murphy, Lorrie Morgan,  Pam Tillis, played for Taylor Swift and Kenny Chesney audiences, and headlined numerous festivals and events. She has performed Live on Fox 28 News, been featured on MTV Live, Pure Country, VH1 Classic and radio stations throughout the nation. Megs and her band deliver an energetic mix of guitar-driven “Crunge” Country Rock Grunge originals. Her First single “It’s My Truck” gained Meg's recognition as one of the top 10 “Next Women of Country” on Spotify as well as “Country Pick of the Week”. Recorded at the world-famous London Bridge Studios in Shoreline, WA, with Ben Smith of "Heart" on the drums, Brad Smith from Blind Melon on Bass, and Shohei Ogami on guitar.
EP available on Spotify, iTunes, Amazon and other music vendors. YouTube link: https://www.youtube.com/watch?v=A_sZlRHV1cY&list=OLAK5uy_lXqkNb2ajKxdaNGs40uSxvihResV678QM

About Baristas Coffee Company: Baristas is a national Coffee Company that is recognized throughout the US. It currently produces and sells coffee related products under the Baristas brand. The Baristas White Coffee single serve cups compatible with the Keurig 2.0 brewing system is the bestselling product in its category. Baristas also markets other coffee related products. Baristas gained mainstream exposure when it became the subject of “Grounded in Seattle” the reality show special feature which aired on WE tv. It has been featured nationally including during Shark Tank on CNBC, CNN, ESPN, Food Network, Cosmopolitan Magazine, Forbes Magazine, Modern Living with kathy Ireland, Sports Illustrated, and other notable media.