(NewMediaWire) - January 29, 2020 - Gold Resource Corporation (NYSE American: GORO) (the “Company”) today announced multiple ore grade intercepts from its maiden drill program at the “Scarlet” target located 400 meters north west of its operating Isabella Pearl mine in Mineral County, Nevada. Near surface ore grade gold intercepts included 24.38 meters grading 1.03 grams per tonne (g/t) gold only 1.52 meters from the surface. In addition, the Company also drilled holes within the Isabella Pearl deposit’s open pit mine to better define the oxide-sulfide boundary with positive results. Gold Resource Corporation is a gold and silver producer, developer and explorer with operations in Oaxaca, Mexico and Nevada, USA. The Company has returned $113 million back to its shareholders in consecutive monthly dividends since July 2010 and offers its shareholders the option to convert their cash dividends into physical gold and silver and take delivery. 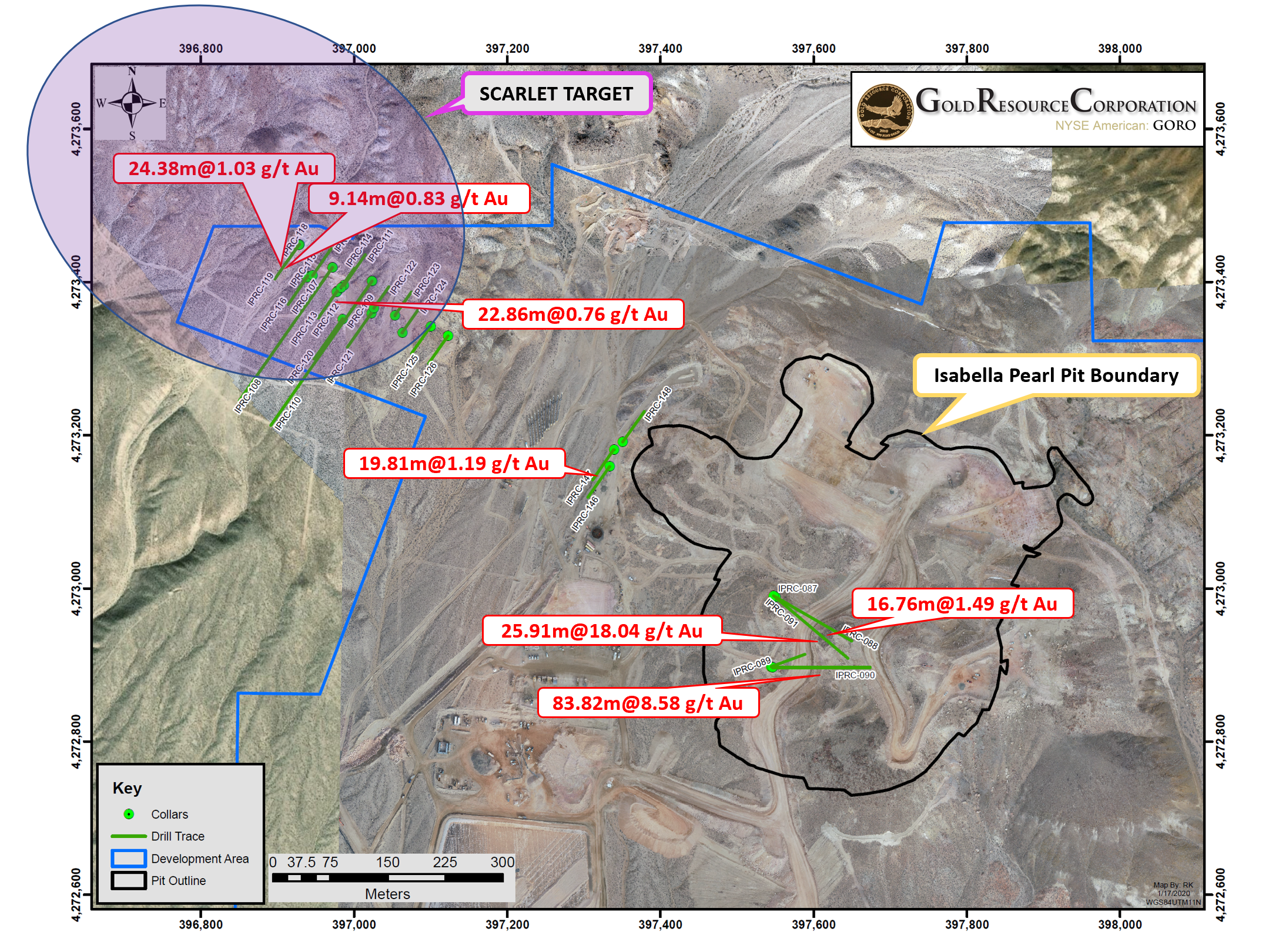 Scarlet’s maiden drill program focused on a small portion of the overall Scarlet target area. This small portion lies within the current permitted Isabella Pearl mine project development area. Eleven holes returned near surface ore grade intercepts with the widest and strongest mineralization occurring to the north west (see map below). In addition to this drill program, the Company recently received its Notice of Intent permit to drill outside of the permitted Isabella Pearl mine plan area. The Company targets to test the north west extensions of this Scarlet mineralization during the 2020 exploration year.

In addition to testing Scarlet, the Company also drilled five holes into the deeper portions of the Isabella Pearl open pit to better define its oxide-sulfide boundary. Drill results and additional metallurgical testing confirmed more oxide mineralization at this boundary can be recovered through heap leach. This mineralization will be included in the upcoming 2019 year-end reserve update.

“We are excited to see the first drill program at Scarlet return very encouraging results including twenty-four meters of over one-gram per tonne gold starting just one and a half meters from the surface,” stated Mr. Barry Devlin, Vice President of Exploration. “The elevation of this Scarlet mineralization is closer in elevation to the deep high-grade in the nearby Isabella Pearl deposit. The elevation of Scarlet’s near surface mineralization may indicate less overburden removal, if we are fortunate enough to delineate a deposit, than what is necessary at Isabella Pearl. 2020 exploration goals include additional drilling at the Isabella Pearl project, specifically focused on Scarlet, as well as a first drill program at our East Camp Douglas property.”

Mr. Jason Reid, President and CEO of Gold Resource Corporation stated, “This maiden drill program at Scarlet has returned some very exciting near surface high-grade drill results, which could represent our next deposit discovered on the Isabella Pearl Project’s substantial mineralized trend. There are numerous additional targets on this trend increasing our chances of finding several more open pit heap leach deposits like our Isabella Pearl mine. We plan to be a long-term gold producer from this unique portion of the Walker Lane Mineral Belt and believe we have secured the best land packages to succeed in finding additional gold deposits at all four of our Nevada Mining Unit properties.”

Mr. Reid continued, “It is also exciting to add heap leachable and recoverable gold ounces from deep in our Isabella Pearl mine at the oxide-sulphide boundary. Intercepts including twenty-five meters of eighteen grams gold and eighty-four meters of eight grams gold are multiples of the one gram per tonne gold we are currently mining in the top of this deposit. This underscores the much higher-grade gold we expect to mine and process at our Isabella Pearl mine in the years to come.”

Gold Resource Corporation is a gold and silver producer, developer and explorer with operations in Oaxaca, Mexico and Nevada, USA. The Company targets low capital expenditure projects with potential for generating high returns on capital. The Company has returned $113 million back to its shareholders in consecutive monthly dividends since July 2010 and offers its shareholders the option to convert their cash dividends into physical gold and silver and take delivery. For more information, please visit GRC’s website, located at www.goldresourcecorp.com and read the Company’s 10-K for an understanding of the risk factors involved.